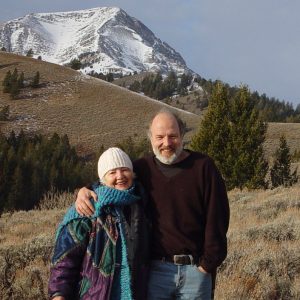 His father was a Wyoming based bush pilot biologist.  His mother grew up on a Colorado farm without electricity.  She eventually went on to graduate school at Columbia University in the emerging field of urban planning.  During a time of growing environmental awareness, civil rights and foreign policy battles, including the Viet Nam war, the young Matteson was already engaged.  His childhood included a mix of school, church, work, play, wilderness exploration, fishing, climbing, falconry, but it also nurtured a value based global social/political activist perspective.

Matteson’s grandparents lived in China for a year in 1935, which resulted in a house full of Chinese and Japanese art in the home that their grandson grew up in decades later.  These Asian art pieces influenced Matteson’s evolving aesthetic.  Another important influence was certain regional tribal artwork, which Matteson felt better expressed the spirit of wildlife species he had intimately observed and sometimes handled.  Photography and representational art from European traditions came into his life in the form of animal field guides, romantic maritime paintings, and Western illustrations – though fraught with stereotypes.  Ancient Egyptian art was especially engaging to Matteson, initially because the falcon god, Horus was so frequently portrayed.

After college Matteson and his brothers built a 24 track audio recording studio, which they operated as a business for several years.  After this, Matteson traveled and taught art at a private grade school.  In 1987 he and childhood friend, Genevieve Winterscheid, were married.  His professional work, since that time, has been in fine art. 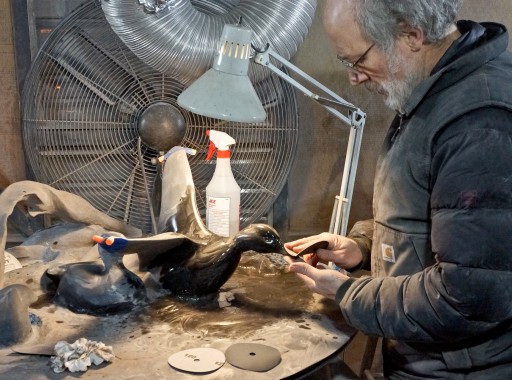 Ross Matteson’s art practice currently centers on, but is not limited to, studio and site specific sculpture.  His 3-dimensional work is unique, elegant, highly crafted, durable and cross-cultural.   Matteson continues to have a science and art based connection to nature that guides his observations and informs his metaphors.  An observation-based understanding of what a specific bird’s behavior or habitat can communicate once anthropomorphized, is illustrated in his marble carving titled Ripple Effect 2012.

Matteson’s fierce embrace of world humanity is demonstrated in an optimistic life focused on gratitude, family, fearless campaigns for human rights, peaceful use of science, social and economic equality issues, visionary and sustainable environmental and agricultural policy, education, health, music and religion. His sculpture, from jewelry to monumental, across a wide breadth of media and activity represent the fruitage of these priorities.

Public exhibition credits include national and international shows.    Of note, are Gilcrease Museum’s (Tulsa OK) Rendezvous a two-man show, Leigh Yawkey Woodson Art Museum’s, (Wausau, WI) Birds in Art, the Prix de West Invitational at the National Cowboy Hall of Fame (Oklahoma City, OK) and the Western Visions Show at The National Museum of Wildlife Art (Jackson, WY).   Memorable gallery shows in the United States and France, have included exhibits at Foster/White Gallery (Seattle, WA) and ARTEN (Paris, France).    Matteson was honored as a “Featured Artist” in 1998 at the Pacific Rim Art Exposition, (Seattle, WA).   His piece “Perfect on Petra” 1999, is in the permanent collection of The National Museum of Wildlife Art (Jackson, WY), Benson Sculpture Gardens (Loveland, CO), the City of Sheridan, WY, and Art on the Avenue (Wenatchee, WA). “Prairie Queen” 2002, “Squirrel Curl” 1997 and “Ruff Night” 2010 are also in the collection of The National Museum of Wildlife Art (Jackson, WY).  His work titled “Virgina” 1995, is in the collection of the Gilcrease Museum (Tulsa OK), at public airport facilities in the United Arab Emirates, and is also a focal point of the Falconer’s Wall of Remembrance, at the World Center for Birds of Prey, Boise, ID.  Two monumental commissioned works are in the Washington State Arts Commission Collection and additional public pieces are located at The Evergreen State College and The University of Washington, City of Olympia, WA and City of Puyallup, WA among others.   His work has been shown at the Natural History Museum (London, United Kingdom) and auctioned at Christie’s South Kensington.

Ross and Genny live in Olympia, WA and Clyde, ID.  Their daughter, Alanna, is also based out of the Pacific Northwest.