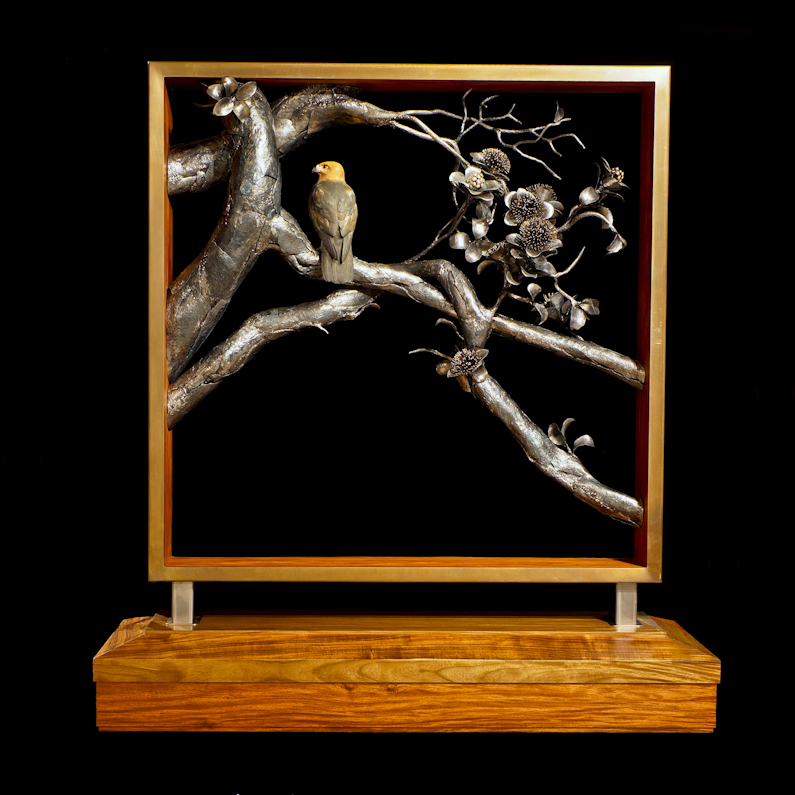 I Sia Eee-oh! is a one-of-kind sculpture and a tribute to the first ever Hawaiian hawk (‘Io’) to be bred and raised in captivity.  Her name is Wahine (Wa-heen-ee). As an ambassador for her endangered species, she is the closest thing to an angel that a raptor will ever be!

Wahine is the first-ever Hawaiian hawk to be bred and raised in captivity.  She was hatched on July 9, 2016 by Sia: The Comanche Nation Ethno-Ornithological Initiative. This picture, showing her inquisitive nature, was taken by Joel Sartore as part of his Photo Ark documentation work done with National Geographic.

Wahinie’s parents were one of five pairs of wild ‘Io’s in 1997 that were entrusted by the United States Fish and Wildlife Service to 5 major research institutions.  Mostly zoo’s; there were all in hopes of learning more about the species — specifically, how to breed them in captivity if that became necessary to save the species.  In 2015, eighteen years later, Wahine’s parents were the only surviving, and now old, pair from the original group.  No young had been produced by any of the zoos.  Ready to move onto other priorities, the Houston Zoo relinquished responsibility and transferred stewardship for the last living pair of ‘Io’s and within 15 months, Wahine was hatched. This surprise and “world’s first” success, was accomplished in Cyril, Oklahoma, under the stewardship and expertise of two men, Wahathuweeka (Bill Voelker) and Kweeni Mahquitsoi Okweetuni (TROY). Bill Voelker and TROY are co-founders of Sia: The Comanche Nation Ethno-Ornithological Initiative.

Sia is also the Numunuh (Comanche) word for feather.  As an organization, it is a unique cultural center and federally recognized Tribal Eagle Aviary that operates on a balance of scientific rigor, historic research and spiritual understanding.  Empowered by the observations and knowledge of Numunuh ancestors, Bill and Troy have continued a tradition of world-class expertise in eagles. With modest available resources, they have bred and raised over 400 eagles for release to the wild.  Their science includes establishing breeding protocols for eagles and other raptors, including many rare birds of cultural significance around the world.  Their commitment is clearly, undeniable.

I met Bill and TROY in Oklahoma City at The Prix de West Invitational Western Art Exhibition, at the National Cowboy and Western Heritage Museum in 2011.  They were providing a hawk for another artist who was doing a sculpting demonstration and needed a live model for reference. As a life-long falconer and educator, I immediately connected with the respect they showed to the birds in their care and the way they handled them — demonstrating but not preaching about their deep traditions and understanding. They were very generous in educating the curious people around them. Our friendship grew out of our shared values.

The Hawaiian hawk, or ‘Io (pronounced eee-oh), is a perfect example of, yet, another bird of cultural significance that Sia is on the front lines of helping. It is not surprising to me that in traditional Polynesian culture throughout all of Hawaii, the ‘Io is synonymous with the Holy Spirit.  The ‘Io’s wild population today, remains only on the Big Island of Hawaii.  It is an endemic species to Hawaii, currently classified as endangered due to its isolated population and pressure from human activity.  Reliable population studies are really are yet to be funded and conducted.

In I Sia Eee-oh!, my ‘Io is perched on a blooming ‘Ohi’a lehua, which is the bird’s preferred nesting tree.  This native tree is also sacred in Hawaiian culture, providing fire colored flowers used in in leis during traditional ceremonies.  Unfortunately, the ‘Ohi’a, like the ‘Io, is a species of much concern and study.  This is due to a fungus causing a blight called “Rapid ‘Ohi’a Death Syndrome”, that has been spreading on the Big Island since 2010.

So, my sculpture highlights these two species, the ‘Io and Ohi’a, which are both the subject of current environmental and cultural concern.  Perhaps even more importantly, I am determined and emphatic that Sia’s remarkable accomplishment, which includes the contribution of indigenous wisdom in a scientific age, should be recognized and celebrated.  I haven’t seen that recognition as forthcoming as I think that it should be.

The conventional science applied by at least 5 other institutions over 18 years failed the ‘io.  It was a deeper science; inseparable from the spiritual knowledge of the Numunuh, gained over centuries of eagle observations and with traditionally based reverence — which actually produced results. In a world hungry for truth telling, especially concerning indigenous history, I feel that Sia’s pattern of consistent success needs to be recognized, celebrated and invested in.  This is not their only example of success. Honor is due.

My title, I Sia Eee-oh! is a phonetic play on words. It shares the fact that we “see an ‘Io” today, because of this invaluable cross-cultural contribution from Sia.  I Sia Eee-oh! is a major fine art piece, brought to life by many caring individuals.