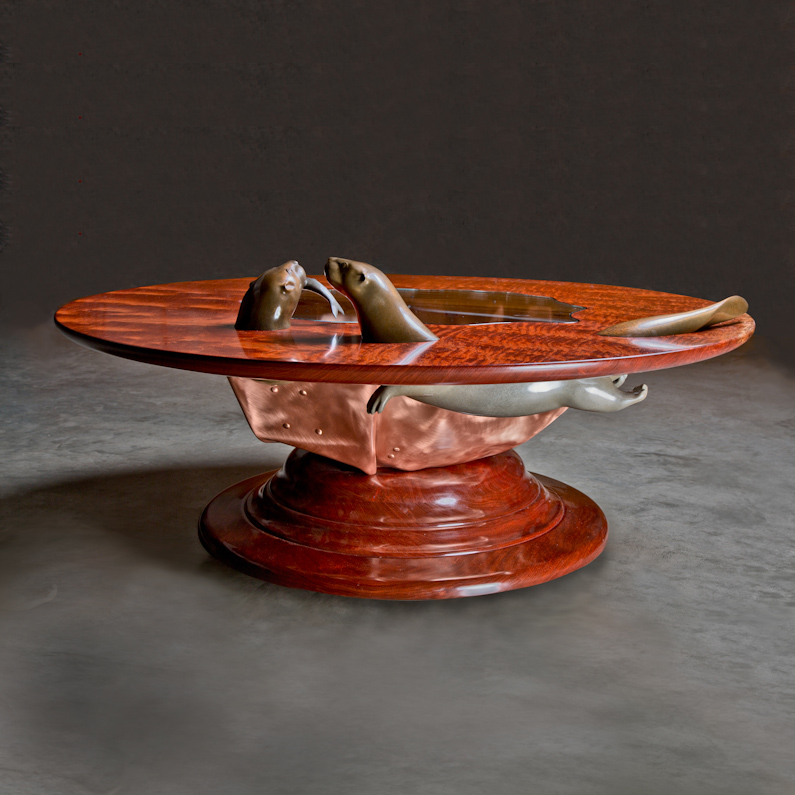 Peregrine’s Plate is a life-sized, black marble carving exploding with the motion of 4 ring-necked ducks panicking in response to a natural predator.  In my mind, the unseen predator is a peregrine falcon since, as a falconer, I use peregrines to hunt ducks.  I am very familiar with a duck’s behavior while swimming at that very moment when a hunting falcon flies over them and they are making their choices between flying or diving to escape. I was confident that during my sculpting process I would be able to discern, from both a behavioral and emotional basis, when the feeling expressed by the piece was just right. The hunting falcon narrative, along with other design parameters, like size and weight, were all part of the site-specific nature of the commission. This collector owns a beautiful private hunting plantation that is frequented by wintering ring-necked ducks.

One of the ducks in Peregrine’s Plate is depicted taking flight. His wings are on the upstroke. In all of the commotion, his mate is knocked slightly back and to the side. The third duck is tails-up while in the process of diving into the water and the fourth, is only suggested by ripples remaining on the water after diving. These birds, along with all of the disturbed watery reflections and broken vegetation, gave me plenty of shapes, textures and ideas to compose the story and visual interest.

Polished Belgian black marble is magical.  It has innate classic beauty. It has been appreciated for centuries but it is also a very brittle, and now rare material. I needed a dense and reliable block of marble, cut to my exact specifications, before committing to such a high value project. For starters, I just needed to find out if the material that I needed, even existed!

Since my proposal was contingent upon finding such a special piece of marble, I needed a stone broker with a very high level of expertise and integrity.  Eventually, I found ABC Worldwide Stone in Brooklyn, NY.  Their people were professional and assured me that they had a direct connection to the marble quarry in Belgium.  We took the next step.

ABC contacted their European partners who started looking for the right piece at the quarry.  Eventually they selected a monstrous block, and shipped it to a stone yard in Portugal.  Focusing on the area of least cracks and highest density, the “heart” of this mountainous slab of rock was identified and then extracted by their experts for my sculpture.  After that, using a 3-dimensional DXF file that my friend Phil Peterson helped me to create for the stone yard’s machinery, this dense cube of stone was refined into a 1,200-pound cylindrical form and then, finally, was shipped to the United States.

Once it arrived, I commenced carving the 36-inch diameter 14-inch high cylinder of stone into Peregrine’s Plate, while referencing off of an already completed life-sized model in wax.  I used photo reference, mounted specimens, personal field observations and other very specialized expertise and tools in the process.

The contrasting texture (and lighter color) of corn against the more polished, reflective and visually “moving” water, lyrically helped paint a story of evasive duck activity.  The ducks, as focal points, had the highest polish, which made them darker elements in the composition.  I made the floating, flying and diving ducks on the surface of the circle of water.  The surface of the water itself, because of the cantilevered  “plate” shaped support form, also appears to be “floating” several inches above the table or pedestal where the finished 400 pound sculpture is placed.   Floating ducks on floating water.

A on-going challenge for me is in bringing an inanimate and stationary block of stone to life — visually suggesting and animating, in this example, the ring-necked duck’s explosive response to the falcon.

To be successful in carving all the delicate forms without breaking them, my tools and craftsmanship needed to be faultless.  I purchased new tools to reduce unnecessary vibrations and stayed focused, despite the whirlwind of my interdisciplinary life.  Marble is unforgiving.  I could only afford to carve this very expensive stone while completely undistracted.  The idea of an open winged bird made out of this particular material was extremely adventurous, but the reward was very satisfying once it was completed.  The quality of the marble became apparent when I tapped on this finished bird’s wings and they rang like bells!

The process of making this sculpture, and remarkable support team that helped, is well documented in the “Peregrine’s Plate – Illustrated Story and Process” section of the mattesonfineart.com web site.